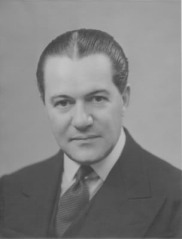 Dennis Yates Wheatley (1897-1977) was born in Brixton, south London, the son of a wine merchant. He began his writing career in his 30s, and straightaway became a best-seller. His best-known books were occult and supernatural thrillers, starting with The Devil Rides Out (1934); but from the beginning there were science fiction elements there too. Black August (1934) is about a future war, after which Britain is rescued from collapse by a palace coup. His large output includes other science fiction novels, such as They Found Atlantis (1936) (they found Atlantis), Sixty Days to Live (1939) (about the arrival of a destructive comet), and Star of Ill-Omen (1952) (which features flying saucers).

Wheatley’s literary excitement (and frustration) began at a very young age, when he decided to spend his weekly penny pocket-money on a copy of Chums, which had a picture of a Red Indian stalking a cowboy. His father saw it, chided the nurse who had allowed the boy to buy it, and threw it on the fire.

Even in later life, when he had more leisure, [my father] rarely read a book and considered reading, above all fiction, as a waste of time. He made no attempt to explain to me that he thought the story beyond my age, or to look at it himself. He simply burnt it before it could be read to me; and on so young a mind this sudden, harsh and unjustifiable punishment started a festering sore that was not to be healed finally for nearly a quarter of a century (I: 45).

Luckily, his mother did not have the same point of view, and the young Wheatley became an avid reader, something which was encouraged by the headmaster of a school in Margate where Wheatley boarded; he used to read Wilkie Collins to the pupils on a Sunday evening. At the age of ten, Wheatley himself would entertain his fellow-pupils by telling stories after lights-out: “A strange hotch-potch of dragons, robbers, witches, Indians and buried treasure; and, no doubt, most of the episodes were lifted from books that had been read to me in the holidays” (I.65).

One holiday in Brighton, the young Wheatley came across the writings of Dumas, which he adored. Many years later, his first novel, The Forbidden Territory (1933) adapted Athos into the Duke de Richleau, Porthos into Rex Van Ryn, Aramis into “my gentle, clever Jew” Simon Aron, and D’Artagnan into the more restrained and English Richard Eaton. But he tried to recreate the atmosphere of Dumas too:

the blend of desperate deeds, arch plotting and passionate love affairs, against great informative backgrounds sprinkled with real people. And most important of all, the spirit of his heroes who, although subject to human frailties and, at times, small meannnesses, set such a magnificent example to all young readers, of courage, loyalty, endurance and determination to win through, whatever the odds (I.79).

At the age of thirteen Wheatley was sent to Dulwich College, in south London, as a day-boy. He exchanged a life of companionship and well-regulated leisure for one of loneliness, hard work, “great loutish prefects”, “dull unsympathetic pedagogues”, and “moronic behaviour” on the rugby pitch: “God, how I hated that rotten school!” (I. 98). After running away, being brought back, being beaten, he was expelled. Once he had become a success, the school boasted of having nurtured him.

What impudence! Let us be plain over the matter. During my two and a half terms there I learned next to nothing. My life was a misery and no master made the least attempt to better my lot. The lessons were dreary and the sports taught with brutality. The Head was an academicians of the Victorian mould, who ruled by fear and cared nothing for the welfare or the happiness of the seven hundred boys who had been confided to his charge. To Dulwich College I owed nothing. The best day’s work I ever did in my life was that which led to my being kicked out of it (I.111).

Wheatley was sent to the Incorporated Thames Nautical Training College H.M.S. Worcester, a late Napoleonic ship-of-the-line anchored off Greenhithe, which trained officers for the Merchant Navy. In some degrees (the bullying, the discipline) it was as bad as Dulwich; the food was far worse. He got through it, at least (remembering Dumas), and in the autumn of 1912 his father offered him the choice of a career at sea, a trial period at sea, or a year each in France, Germany and Portugal learning about wine before joining his father’s firm. “I did not hesitate for one moment” (I.182).

He had one last term at HMS Worcester, and in April 1913 set off for Germany, where he was apprenticed to a winery in Traben-Trarbach on the Moselle. He learned a lot about wine, including the ability to induce vomiting before bed after an evening’s drinking. “The adoption of this sensible Roman custom also served me well later, when as a young officer I took part in the terrific binges that were customary of guest nights during the 1914-18 war” (I.203). When he returned to England, he began work in his father’s business.

Towards the end of July 1914, Baron Goldschmidt von Rothschild gave his wine merchant, Wheatley senior, an evening in his box at Covent Garden. The family saw Aïda. In the royal box was Queen Alexandra; and with her were her sister the Dowager Empress of Russia and her sister-in-law the Queen of Denmark.

The spectacle on the stage was far outshone each time the lights went up by that of the auditorium. Every box was occupied and every stall. The hundreds of women were clad in every shade of silk and satin; some had velvet cloaks, others surs of ermine or Russian sable. Pearls which must have cost thousands hung in ropes round their necks. Diamonds, rubies, sapphires and emeralds which must have been worth several million pounds glittered and scintillated from their hair, ears, necks, corsages and hands. It was a right never to be forgotten. It epitomised the old world of aristocracy, great private fortunes, luxury, elegance and leisure […] Before another week had passed Belgium, France and Britain would […] be at war. And ten million people were to die before a gala performance would be held at Covent Garden again (I.248).

On 1 January 1919, after his war service, he went back to his father’s office at 26 South Audley Street. His father died of cirrhosis of the liver, “the occupational disease of wine-merchants” (III.62), in 1927. Dennis Wheatley took over the business. He tried to expand it, but the firm collapsed in the wake of the slump of 1930; Wheatley was advised that all he could do was to declare himself bankrupt. He got some work as a part-time wine-seller for Justerini and Brooks, but he also began to write; it was his second wife Joan who encouraged him in this new career.

The Forbidden Territory (1933), in which he introduced his characters the Duke of Richleau and Rex Van Ryn, was hugely successful; Black August (1934) introduced another long-running character, Gregory Sallust. Meeting with Aleister Crowley and Montague Summers gave him the idea of introducing the occult, in The Devil Rides Out (1934).

When the Second World War arrived, Wheatley was ready to present himself for duty. He disliked Hitler strongly (while he thought that anyone who preferred Communism over General Franco was mad) (III.167). His right-wing credentials were recognised by Christina Foyle, of the bookshop Foyles, who invited him to be a Patron for the new Right Wing Book Club, “to counter, to some extent,” as Wheatley wrote, “the spate of subversive stuff which, for several years past, had been pouring from the Left Book Club under the aegis of Victor Gollancz” (III.169). Wheatley also did work for the War Office, writing papers on how to resist German invasion, and on how (if he was a German) he would plan to invade Britain. Wheatley, never one to fail to blow his own trumpet, notes that when the Germans’ own Operation Sea Lion was discovered, after the war, the German plan was very close to Wheatley’s own, and far removed from what the War Office believed might happen (III.189). He produced other papers, on Village Defence and Total War. All this led him to a commission in the Royal Air Force Volunteer Reserve, and a job working for the Joint Planning Staff, which he did until Christmas 1944. He specialised in ideas of deception.

He continued to write fiction: Strange Conflict (1942) is about how the Duke of Richleau and Gregory Sallust foil the attempt by the Germans to use occult forces to overwhelm the Allies. It is only the second of his occult novels: more were to come after the war—The Haunting of Toby Jugg (1948), To the Devil—A Daughter (1953), The Ka of Gifford Hillary (1956), The Satanist (1960) and Unholy Crusade (1967).

The Oxford Dictionary of National Biography entry is by J.G. Links, revised by Clive Bloom; there is an extended biography by Phil Baker: The Devil is a Gentleman: The Life and Times of Dennis Wheatley (Sawtry, Cambs: Dedalus, 2009); but as far as possible I have relied on the three volumes of Wheatley’s own memoirs, which have overall title of The Time Has Come… The Memoirs of Dennis Wheatley, and individual titles of The Young Man Said, 1897-1914 (London: Hutchinson, 1977); Officer and Temporary Gentleman, 1914-1919 (London: Hutchinson, 1978); and Drink and Ink, 1919-1977 (London: Hutchinson, 1979). In my two entries the different volumes are indicated by a I, II, or III.