A.M. Burrage in the Great War 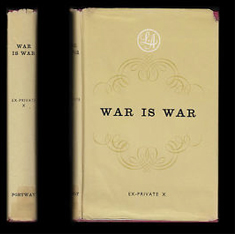 Burrage wrote a war memoir, under the pseudonym Ex-Private X, called War is War (London: Gollancz, 1930), “a sincere attempt to put on record, albeit from memory, the experiences of one man as a private soldier in France during the war” (5). Most memoirs, as he points out, have been from ex-officers, who cannot possibly (argues Burrage) get inside the skin of Tommy Atkins, the ordinary soldier.

The account starts with the ferry journey to Le Havre. Private X and his fellows had “an officer’s farewell” when they left Le Havre.

We were paraded before a hut to be inspected by some pompous old ass or other. After keeping us waiting about the average length of time he tottered out rather unsteadily on his pins and breathed whisky all over us—for which I was rather grateful, for I had begun to forget what whisky smelt like. Having done which, he blinked at us owlishly and with some difficulty remarked: “Y’re dishghrace to y’re reg’ment,” Then he tottered back into the hut—to be a credit to his (19).

Private X did not suffer fools gladly. There was the woman at the YMCA who dispensed free stationery, for instance, who lectured him on the evils of Roman Catholicism (he was a Roman Catholic) and whom he deliberately needled. He took delight in needling his superiors too. So when the censor told him he couldn’t say in a letter to his mother that the Germans had destroyed Monchy-sur-Bois, he wrote another letter in which he said that he couldn’t mention “the village by name in case the Germans found out that there had been a battle there” (47). His high point came one day in Bavincourt (a quiet back water where he saw no action), when an RAMC sergeant told him to sweep the step, but not to sweep the dust into the path, but into a tin. He had swept the dust into a pile, and told a colleague to B.O. [bugger off] and find a tin somewhere. While waiting, alongside his pile of dust, Sir Douglas Haig came out of the building. Haig told him not to stand to attention or to hang around doing nothing, but to sweep the dust away immediately. Private X did so, and reported to the sergeant that his order about putting the dust into a tin had been countermanded by the C-in-C. “The story was all over our detachment by mid-day and I was not popular. ‘You bloody fool, you’ll get us sent up the line’ “(52-53).

Soon they did go up the line, to Mont St Eloi, where they met with lice for the first time.

We seemed to spend most of our spare time going through our clothes, catching lice and cracking them between our thumbnails and burring their eggs under the seams with cigarette ends. Not that we had much spare time. It was parades, parades, parades all day, bomb-throwing, bayonet-fighting, the musketry range (56).

From there they moved to Roclincourt, two miles on the left flank of Arras (“Arras was a more poignant sight than Ypres. Ypres was a bleeding corpse and Arras still writhing in her death agony”: 58). Almost immediately Private X fell ill with a very high temperature: “At the time I thought it rather clever of me to achieve trench fever without having been in the trenches” (59).

The worst of being in a quiet part of the line is that one sees too much of the Staff. They are very bad for one’s ego. It is bad to hate people. Once cannot conjure up a personal hatred for shells—or the people who are merely doing their job by sending them over—but it is easy to conceive a hellish hatred for Staff officers (72) […] Suppose the Deity were unjust and unloving, and imagine His attitude towards the lower animals of His own creation and you will have some faint idea of the average Staff officer’s regard for the man who carried a rifle. Yet in my battalion there were men better born, better bred and better educated than many of these organ-grinders’ monkey in their primrose-coloured breeches (73).

He notes that he is finally becoming a soldier; he can distinguish the sound of the different shells that come over.

We are slowly becoming real soldiers, although many of us have not yet set eyes on a German at large. Few of us have killed our man, and we are slowly realising that the job of the infantry isn’t to kill. It is the artillery and the machine-gun corps who do the killing. We are merely there to be killed. We are the little flags which the General sticks on the war-map to show the position of the front line (82).

Private X’s private’s-eye-view of Passchendaele is painful to read. His platoon took a pill-box, full of water, from the Germans, but most of them died doing so.

We learned during the day that the Canadians on our right, advancing at the same time as ourselves on the higher and drier ground, had taken their objectives. Subsequently we were told “unofficially” that we were not expected to get very far through the swamp and that we were merely being used to draw fire while the Canadians did the job. Well, it wasn’t the last time that I was used as cannon-fodder.

The papers were loud in praise of the Canadians but had practically nothing to say about us—except in the casualty-lists. Officially we were told that we were “too brave” and had gone too far; but Sir Arthur Conan Doyle, in his History of the War, dismissed us with the remark that we “seemed to find some difficulty in getting forward.” The difficulty consisted mainly of being killed in heaps.

Now I love Sir Arthur Conan Doyle without ever having met him. His stories delighted my youth, and he sent a charming letter to me—a practically unknown man—complimenting me on one of mine. But he should have left the war alone. I should go to him if I wanted a really authentic photograph of a fairy or a trunk call through to one of my sleeping ancestors. But he should have left the war to the soldiers. You cannot write about the war by merely reading newspaper reports and looking at maps (151).

All through this, Burrage kept on writing.

I was sitting in the barn on a wet evening trying to earn an honest penny by the light of one candle, with a bit of indelible pencil and a writing-block, when, for some reason or other, Dutch and Chester [two officers] came in. I rose and stood to attention, and Dutch told me to stand easy and sit down again. He added: “I read a very charming story in this month’s Windsor Magazine by somebody of your name. Any relation?” “I expect it was mine, sir,” I said. “I write for the Windsor. I’m trying to do another for them now.” As they were going out I heard Chester say, “Poor devil!” but I never learned if he were sorry for a writer who had to ply his trade under such conditions or if he pitied the intellect which had produced that particular tale. I expect it was a bit of both (165-66).

There are precious few specificities or dates in Private X’s account. The exception is near the end: “Then dawned April the 7th, a red letter day in my memory.”

It is 7 April 1918, on the banks of the Ancre. The defence of this position by the British and the Australians brought an end to the German advance in the so-called Ludendorf Offensive.

It was a fine morning. The Ancre flowed blue and peaceful below us at the bottom of the slope. I remember that we had rissoles for breakfast […] Our bit of front was quite quiet, but there was a lot of firing going on in Aveluy Wood on our right, and it must have been from there that I picked up a stray bullet. It must have been nearly spent and had a very steep downward trajectory to have got me in the way it did. It got me over the right kidney.

Strange what one’s nerves will do. I felt it go right through me like red hot wire and come out through my belly, and actually opened up the front of the trousers and pulled up my shirt to see the hole from which is had emerged. But there was no hole there. I had imagined it all—or nearly all (271).

It turned out that it was just a graze, from an almost spent bullet. But he also found that he could hardly walk; he had trench feet. He was told to march (or hobble) to a neighbouring village. He met with some New Zealanders, who gave him a large tot of rum (“more precious than rubies”, as it was grudgingly rationed out: 275), dressed his feet, and put him on a stretcher, where he was bound for convalescence in Trouville (where soldiers ant before ebbing sent back to the front again). But on the way he met a Catholic padre, who actually knew his stories (and had read one that even Burrage had not yet seen in print), and he managed to get marked for Blighty. The last sentence of his account is: “And so I fell asleep and woke up in Cheltenham” (288).

The memoir ends there. I will end this page by noting that Jack Adrian has commented on the way in which Burrage incorporated his own experiences in his ghost stories. In the 1920s he used his experiences as a soldier in the Great War. In “Orders from Brigade” he has a ghost save a company from destruction by German guns. In “The Soldier” the psychic sleuth Francis Chard finds a couple who are fleeing from the ghost of a betrayed husband, who had been slaughtered in the trenches. Likewise, in “The Shadowy Escort” the ghost of a soldier who was left to die in No Man’s Land pursues the colleague who could have saved him. Adrian adds that “Burrage’s war masterpiece, however, is undoubtedly “The Recurring Tragedy”, in which a British Army general suddenly recalls his past life as the man who spurned with his boot the crucifix-laden Christ.”