Geoffrey Dearmer in the Great War 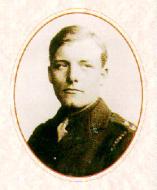 Geoffrey Dearmer, who had left Oxford earlier in the year, enlisted in August 1914, and was commissioned as a second lieutenant in the 2nd battalion (Royal Fusiliers) of the London regiment on 25 September 1914.

In July 1915 he learned that his mother had died of enteric fever at Kragujevac in Serbia while serving as an orderly with an ambulance unit. In October 1915,  just days before he himself landed in the Dardanelles, his younger brother was killed at Suvla Bay in the Dardanelles by a shell that landed right on his tent.

Dearmer himself survived that campaign, and then served on the western front. In August 1916 he was transferred to the Army Service Corps, responsible for organising supplies to the front.

Dearmer did not write any war memoirs; he left two volume of of poetry instead: Poems (1918) and The Day’s Delight (1923). The first volume was dedicated to his brother Christopher, “killed, Suvla Bay, October 6th, 1915”; the dedicatory poem begins:

At Suvla when a sickening curse of sound
Came hurtling from the shrapnel-shaken skies,
Without a word you shuddered to the ground
And with a gesture hid your darkening eyes.

Later in the volume, the poem “The Fallen” recalls his brother again, and imagines him living again, Christ-like:

I turned ; and saw my Brother standing there.
His face was like a dawning happiness —
I saw wounds in his hands, his feet, his side.

His best-known poem is probably “The Turkish Trench Dog”, but his poem “Mudros after the Evacuation” is often quoted too, for the last lines:

Here children in strange peace,
Seek solitude to dull the tragedy,
And needless horror of the Dardanelles.

but actually the poem is remarkable too for its joy in nature, which seems to have sustained Dearmer through the war, together with his strong religious beliefs, and make his poems rather more optimistic than those of Owen or Sassoon. It starts:

I laughed to see the gulls that dipped to cling
To the torn edge of surf and blowing spray,
Where some gaunt battleship, a rolling king,
Still dreams of phantom battles in the bay.
I saw a cloud, a full-blown cotton flower
Drift vaguely like a wandering butterfly,
I laughed to think it bore no pregnant shower
Of blinding shrapnel scattered from the sky.

My information comes from Mark Bostridge’s entry in the Oxford Dictionary of National Biography; the volume of poetry can be found online.