Stella Benson in the Great War 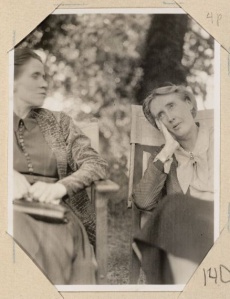 Stella Benson was at home with her mother in Glassenbury in Kent at the beginning of August 1914. When she heard on 2 August that Germany had declared war on Russia, she wrote in her diary: “So now all our hopes of sitting out and looking on are over […] I was distraite and saw that I was apt to give Suffrage too large a place in my sphere. It is awful not to know what is happening, and yet to feel that somewhere heroic stupid men are dying, as dumb as brutes” (quoted in Grant, 58). Her ‘boyfriend’ Nigel and his brother enlisted in the Army, and she enrolled herself in the Women’s Emergency Corps, an agency which recruited for war work: she offered herself as a clerk, typist or French interpreter. She had an altercation with someone at the Suffragist offices, and “I remember coming back and talking to Aunt Freddie about drowning myself. She said ‘I shouldn’t do that'” (quoted Grant 59).

Benson presented herself a second time at the Women’s Emergency Corps, demanding a placement somewhere, and she was promised hard work in the East End. She met the director of War Relief in Shoreditch, and he dispatched her for work with the Charity Organisation Society in Hoxton. The COS coordinated charities working among the poor, and insisted on making sure that the poor to be helped were “deserving”. Benson reacted against it almost immediately, and satirised it in her novel Living Alone. Her immediate task was to register all the applications that came in from the dependants of enlisted men, and from those who lost their jobs with the coming of the war.

Nigel went on a drive with Stella Benson, although she was offended when he “completely lost his head as regards me”. After she had had words with him, she enjoyed the drive, but “when I said good bye to Nigel on Reading Station, I was glad to be an independent suffragette, and ate a joyous poached egg at Paddington with more pleasure than I should have taken in a dinner à deux with Nigel at Reading” (quoted Grant 65). Later on she lost her head even more, and allowed Nigel to kiss her.

In Autumn 1914 she was made organising secretary of a workroom set up under the Queen Mary’s Work for Women scheme, which was intended to give jobs to women who had lost their own jobs because of the war. Around 80 women sat in chill workrooms sewing articles for hospitals and the army. In January 1915 she decided to go and live near her work: she took lodging in Nichols Square, Haggerston. By March she was working so hard that she was relieved to be able to of to the south of France with her mother to spend a little time with her brother, who was convalescing after his experience on the Western Front.

On 31 May 1915 was the first Zeppelin raid on London; Benson went out to investigate. As Joy Grant put it, in relation to the later air raid on the City on 8 September, Benson “went out to survey the damage in much the spirit of concerned inquisitiveness as her ancestor Sam Pepys had displayed nearly two hundred and fifty years earlier, in another and far more devastating fire” (Grant 77-78).

I was very anxious about my dear St Paul’s, until I got to the City and saw it was safe. The streets were very brilliant—though lampless—the fires were so big, dancing over the roofs, and all the chimneys and high buildings were red, even in Shoreditch—like a sunset. I talked to everybody, and didn’t come home until I could find nothing more to look at. Up ‘ackney Road, Shoreditchers, whose enthusiasm always takes a wrong turning, were roughly handling bicyclists who still had their lamps lit. […] I wonder if I should behave decently under fire. Certainly tonight though I looked up at the Zeppelin standing exactly above me, in a position to drop a pea into my mouth, I wasn’t frightened, only brutally excited (quoted Grant 78).

In her novel This is the End Benson again expresses for fondness for St Paul’s: “St Paul was an anti-saint, I think, who very badly needed to get married and be answered back now and then. I believe it is possible that he was unworthy of that great house called by his name” (110).

In June 1915, Benson (who had until then had real problems making ends meet, living off an annuity) took a one-pound-a-week salaried post at the Charity Organisation Society. Her first novel came out in the autumn (from which she eventually made £60). But she was ill again; on 12 November her doctor diagnosed consumption, which is what she had always dreaded. In January she retired to Margate for six weeks to recuperate. There were no air-raids while she was there, though she could hear the British battleships pounding the Belgian coast. She saw the plume of smoke rising from a German submarine on the Goodwin Sands that was destroyed by bombs: “it is about the nearest I have been to furious death, I think” (quoted Grant 86).

For a good part of 1916 she was out of London; she spent some time in Cornwall, writing This Is the End. Back in London in the autumn, her health no better, she nevertheless took on several jobs, including working (as her aunt did) for the Wounded and Missing Officers’ Bureau of the Red Cross. At the end of 1916 she wrote in her diary:

I believe one secretly dreads Peace almost as much as one would have dreaded War had one known enough about it. We know War now, it is like a terrible chill in the air, we breathed it in, we grew upon it. And one of the things it has taught us is that Peace was also a terrible thing, how did we live without choking. It is pathetic to think of those fool Americans still proud and careful of their untested peace […] There is no getting back to peaceful peace. War has made drunkards of us all, we can never drink barley water with pleasure again. If peace comes we shall make something new and terrible out of it. We have grown up, we have put away childish things (quoted Grant 93).

On early January 1917 Benson’s doctor spoke to her severely: she should behave henceforth as an invalid. She went to stay for a while in Berkshire, and there took the notion of doing war work by working on the land. She found a farmer to employ her; she was told to wear what women volunteers for landwork wore: not bunched up skirts like regular female workers, but a sweater, trousers, men’s boots and gaiters (later on she had her hair  cut short, too, by a “rather darling young widow”: Grant 101). This is the End came out when she was away. She was still not well: of the 112 days she could have done her back-breaking work in the vegetable fields, she missed 48 because of illness.

In August she led a rebellion against the farmer to demand three shillings more than the fifteen shillings for six days’ work that the women were getting. The farmer refused and, to get his own back, made Benson wait for half an hour in the pouring rain for her money. She left, for good. In London, she began a new novel, Living Alone; she witnessed some of the worst bombing, and saw crowds in Hoxton running to find shelter in public buildings, and looting.

She was ill again early in 1918, and her doctor recommended South Africa, and she began to think of nursing homes Instead she went back to Berkshire and advertised her services for indoor or outdoor help at six pence an hour. But in May she supplied for a passport to go to California, for her health, and it came through. She sailed on 1 July 1918, on the Cunard liner Orduna. She stayed in America for 18 months altogether. On 21 December 1919 a Japanese steamship took her out of San Francisco on a journey across the Pacific; and she was to stay in the Far East (barring a few trips home) for the rest of her life.

She finished Living Alone while in California, and it was published in London before she left for Asia. Its preface announced:

This is not a real book. It does not deal with real people, nor should it be read by real people. But there are in the world so many real books already written for the benefit of real people, and there are still so many to be written, that I cannot believe that a little alien book such as this, written for the magically-inclined minority, can be considered too assertive a trespasser (v).

The book is not real; but it starts with six middle class women of leisure who are spending most of the War sitting on committees in order to Do Good; this is just the sort of Great War reality that Benson was familiar with. This committee was on War Savings. and the committee is thrown into turmoil by the arrival of a young woman with a broomstick who announces herself to be a witch. She lives in a house which is open to anyone to stay in, anyone, that is, who liked solitude, and quiet, and a minimum of comfort. “There is a pump in the back yard. There is no telephone, no electric light, no hot water system, no attendance, and no modern comfort whatsoever. Tradesmen are forbidden to call. There is no charge for residence in the house” (33). There was currently only one resident. As the witch says, “a lot of people can swallow everything but the last clause.”

There is a character who spends her mornings collecting evidence from charitable spies about the Naughty Poor; the conductor of an underground train who fell in love with the conductress of another, so that “the bewildered train stood for hours at Mornington Crescent before any member of the watching public could find the heart to interrupt the pretty scene” (99); the wizard who moves through the house to the accompaniment of orchestral music, and keeps attempting the rather difficult spell of covering the dining table with a blizzard of butterflies; and one of “our” witches has a dog-fight with a German witch who is accompanying a flight of German bombers to the skies of London. The German and English witches have a conversation about which of their two nations has been the naughtiest. They realise they are both Crusaders at War with Evil, and the English witch wonders where Evil is, then, if they are both fighting it: in No Man’s Land?

There can be few more charming, witty and irreverent novels to arise out of the Great War. Yet, inevitably, it is poignant too. Richard notes:

That’s the curious part of this War. So gross and so impossible and so unmagic was its cause, that magic, which had been virtually dead, rose again to meet it. The worse a world grows, the greater will magic grow to save it. Magic only dies in a tepid world. I think there is now more magic in the world than ever before. The soil of France is alive with it, and as for Belgium—when Belgium gets back home at last she will find her desecrated house enchanted… And the same applies to all the thresholds in the world which fighting-men have crossed and will never cross again, except in the dreams of their friends. That sort of austere and secret magic, like a word known by all and spoken by none, is pretty nearly all that is left to keep the world alive now… (ellipses in original: 191).